Rumors have been flying around about a new, smaller Ram pickup truck arriving soon, and it will give the mid-size Ford Maverick a run for its money. Several reports indicate that the new small Ram will arrive in the U.S. as the Ram Dakota, but there are also rumors that there will be a Dakota and an even smaller Ram 1200. In the world of midsize trucks for sale, Ram once again plans to stand out from the pack.

A New Lane for Truck Buyers

Drivers who want the function and utility of a truck without the bulky size should get excited about this new Ram. The lineup already has bigger trucks for sale, so it’s time to go small and compete with other new small trucks on the market, such as the Maverick. 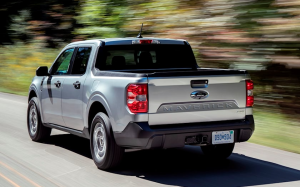 So What’s All the Fuss About the Maverick?

The 2022 Ford Maverick fits in the lineup under the mid-size Ranger and rides on the Bronco chassis. It comes standard with a hybrid powertrain made up of a 2.5-liter four-cylinder gas engine and an electric motor, but you can opt for a 2.0-liter turbo four-cylinder gas engine too. Every Maverick has a crew cab, four doors, and lots of storage cubbies and compartments. No matter which Maverick model you have, it comes with a 4.5-foot bed with a 12-volt power outlet. If you want more power back there, a 110-volt outlet is optional.

There’s still a lot to learn about the new Ram but picture a smaller version of the 1500. It should sport similar LED headlights, the same exterior body lines, and the same grille to make sure it’s immediately recognizable as a Ram truck. But, without any hard facts available yet about what’s coming, the rumor mill is hard at work. Some say it could share some of the Gladiator’s bones, while others say Ram could build it on a smaller version of their half-ton truck. At this point, we still have to wait and see.

The bigger, the better is not necessarily the case for pickup trucks for sale these days. Smaller pickups are making a comeback. The Ford Maverick and the Hyundai Santa Cruz have already hit the road, and both feature a unibody chassis and cabs that make you feel like you’re riding in an upscale SUV.

The new Ram might set itself apart from these by arriving with a body-on-frame chassis. If Ram builds it on a smaller version of the Ram 1500 platform, it could even sport a V-8 engine.

Mike Koval, Ram’s chief, recently announced that Ram would introduce eight new trucks in the next four years. He and his team know that the mid-size truck is a huge market right now, so it just makes sense that one of the eight will be the smaller Dakota or 1200.

The Kia Sportage X-Pro is Ready For Rallying